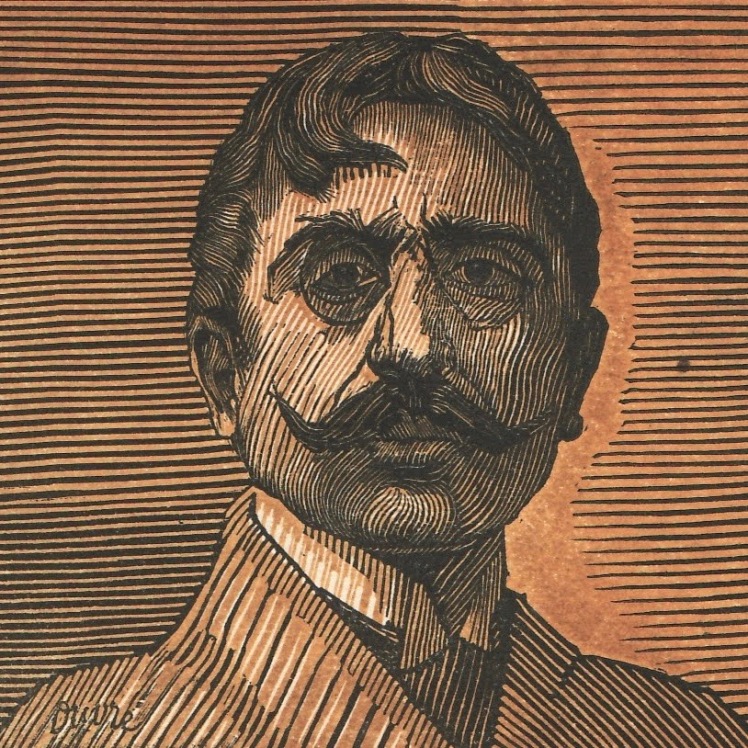 Most English-language readers will have at least a passing familiarity with the French writers who followed Baudelaire: Huysmans, Verlaine, Rimbaud, Mallarmé, Barbey d’Aurevilly. Rarely mentioned, however, is the name of Jean Moréas. Except for a few poems he has remained little-translated and little-known in the Anglophone world, despite his important legacy as the founder of the Symbolism movement.

Jean Moréas (1856-1910) was born Ioannis Papadiamantopoulos in Athens, Greece, to a distinguished family with ties to the Greek War of Independence—his grandfather helped raise the Christian flag at Agia Lavra in 1821, triggering the revolt against the Turks, and later died with Lord Byron at Missolonghi. His father served as attorney general to the high court of Athens and other relatives occupied important positions in the military, with one cousin appointed to the king’s honor guard.

Moréas was educated in French by a Parisian governess who had formerly acted with the Comédie-Français, and he spent some of his childhood and adolescence in Marseilles. Precocious in his youth, he acquired a library of more than 2,000 books with an emphasis on Renaissance poetry and French literature. By age ten he had declared his aspiration to become the greatest of French poets.

Moréas reached Paris between 1875 and 1878. He had first been sent to Heidelberg to train as a lawyer. “My father wanted me in Germany,” he would later tell friends. “I wanted to see France. Twice I fled my home and was able to reach Paris. Fate showed me the way—my star guiding me.” At the age of 22 he settled in Paris permanently and began to establish himself as a writer. His first association was with the Hydropathes circle and he published extensively in their newspaper, Le Chat Noir.

In France at the fin de siècle the literary world was dominated by two forces. On the one hand: Emile Zola and the “Naturalists” who sought to render human experience in evolutionary terms—man impelled by “nerves and blood.” On the other: that late-Romantic movement which had begun with Charles Baudelaire and his reading of Edgar Allan Poe, and which was later represented by Joris-Karl Huysmans and Stéphane Mallarmé, insisting cryptically upon higher realms of order and the intrusion of divine or satanic symbols in everyday life.

Moréas belonged resolutely to this latter camp, then known as Decadence. He saw implicit in its doctrine the teaching of the Neoplatonists that earthly forms were derived from heavenly models. Moréas believed that employing symbols from the sensible world, poets could evoke, by reflection, a higher one. Baudelaire had suggested much the same in his poem “Correspondences:”

In Nature’s temple living pillars rise
And words are murmured none have understood
And man passes through a forest of symbols watching him with friendly eyes
Perfumes, colors and sounds correspond to one another
Like long echoes which from afar merge into
A deep and dark whole.

With the publication of Les Syrtes (1884) and Les Cantilènes (1886), his first major collections, Moréas became an apologist for the Decadent movement. Writing in publications like Le Figaro and XIXe Siècle he addressed critics who alleged superficiality, insisting that the movement was dedicated to the pursuit of higher truths. “Those who call themselves Decadents,” he wrote in reply to the critic Paul Bourde, “seek above all in their art the pure Concept and the eternal Symbol.”

Moréas was not interested in the aesthetic of moral despair that permeated Decadent literature. By identifying Baudelaire’s legacy instead with an aspiration toward the divine, Moréas was preparing the way for a rejection of the “Decadent” label altogether. In Le Figaro of 18 September 1886 Moréas published the manifesto of Symbolism, a new movement that would appropriate the Decadents but purify and refocus their imagery. Here he emphasized the esoteric doctrine at its core:

Symbolist poets seek to clothe the Idea in a tangible form, which would not be an end in itself, but which would remain subject to the Idea, while serving to express it. In its turn, the Idea must in no way allow itself to be deprived of the sumptuous robes of external analogies; for the essential characteristic of Symbolist art resides in never going as far as to reproduce the Idea in itself. So, in this art form, scenes of nature, human actions, all concrete phenomena, will not be depicted as such: they are tangible forms, whose purpose is to represent their concealed affinities with primordial Ideas.

In the wake of Symbolism, Moréas became a literary celebrity and a principal French poet. Among the young writers who followed him, he commanded something akin to adoration. (Oscar Wilde, dining in Paris with Moréas and his acolytes, stormed out of the restaurant in exasperation when they recited nothing but odes to Jean Moréas.) In temperament, he possessed a distance that often made him appear humorless, egotistical, or contemptuous. He could be harsh, but never vindictive or unfair. He was nocturnal, but morally upright, and absolutely restless. He would hold court in the cafés of Les Halles, sometimes passing through half a dozen in one night. The American critic Vance Thompson, who encountered Moréas at the Café François Premiére, described his entrance in “a long, monkish great-coat reaching his heels, a silk hat tipped over his eyebrows. His mustache is twisted up truculently. He has the air of Bobadil, of Drawcansir—of a pirate of the Spanish Main. Across his face runs a sneer like a sabre-cut. He stalks sombrely, a monocle glued in his right eye—which is absurd—and takes a seat in Verlaine’s old corner.”

Within a few years, Symbolism had become a broad, multi-disciplined school, encompassing visual art and music as well as literature. But increasingly, it was fueled by ideologies quite divergent from that of its founder. What frustrated Moréas about many of the new poets who flocked to Symbolism was their adoption of free verse, a technique that he had ironically championed himself in the manifesto. It is likely that as Moréas became more concerned with metaphysics, he came to see the undisciplined style at odds with the Platonic notion of a correct—or ideal—structure for which the artist should strive. There was a political dimension here as well. The faction that embraced free verse was increasingly tied to the political Left. The poet Adolphe Retté would declare this affinity in an article for La Plume in which he wrote, “two ideas have continued their evolution upward and have affirmed their vitality: in literature, free verse, in philosophy, the anarchist doctrine.”

This trend was unacceptable to Moréas, who was a man of the Right. Although he remained publicly aloof from French politics, in private he was an ardent monarchist who felt even the Orleanist model of a “Citizen King” did not go far enough. One of his earliest supporters and friends was the classical critic Charles Maurras who founded the monarchist political faction, Action Française.

By 1890, Moréas had announced the demise of Symbolism—or, rather, its need of further clarification. This he provided with a new book of poetry, Le Pèlerin Passionné, and a new manifesto in Le Figaro. Aided by Maurras, Raymond de la Tailhède, Maurice du Plessis, and Ernest Raynaud, Moréas founded the École Romane. Their aim was to re-establish a traditional French poetry based on Medieval verse structure and Greco-Roman symbolism—a fitting synthesis for the Greek émigré, but one also rooted in traditional French mythology. (Whereas the Romans were said to descend from the Trojan Aeneas, the French claimed the Trojan Francus as their founding father.)

Charles Maurras probably deserves more credit for the doctrine of Romanism than he is given. Much is made of the influence of Moréas and the École Romane—with its enchanted Medievalism—on Maurras and Action Française. But the influence went both ways. Maurras had long been a supporter of the félibrige writers in his native Provence—Frédéric Mistral and others—who promoted Occitan, the ancient vernacular form of Latin still spoken in the region. René Wellek, in Yale French Studies, writes that Maurras was “convinced of the possibility of a Provençal Renaissance, linguistic and poetic. Provence provided him with the symbolic center of Latinity: the crossroads of the Greek, Latin, and French traditions.” A similar spirit animated the École Romane.

To many at the time, the rejection of Symbolism by its founder was jarring. The critic Max Nordau wrote that, “Moréas is one of the inventors of the word ‘Symbolism.’ For some few years he was the high-priest of this secret doctrine, and administered the duties of his service with requisite seriousness. One day he suddenly abjured his self-founded faith, and declared that ‘Symbolism’ had always been meant only as a joke, to lead fools by the nose withal; and that the true salvation of poetry was in Romanism.”

The shift was nothing so dramatic. If anything, the École Romane presented a sharpening of the Symbolist philosophy. In his earlier manifesto, Moréas advocated a classical conception of symbol; now he was going a step further, advocating a return to actual classical symbols and structure. Indeed, the two major collections Moréas published under the aegis of the Roman school—Le Pèlerin Passionné (1891) and Les Stances (1893)—come across as natural developments of his work to date.

Moréas would no doubt have been pleased to know that these latter volumes, his greatest successes at the time, remain the ones for which he is best remembered. And yet, as biographer John Davis Butler laments, even in France Moréas is “received by the public, le public vulgaire, with a casualness akin to apathy.”

An earlier version of this article was published in the Quarterly Review in 2011.

See also: The Symbolist Manifesto and A Symbolist Correspondence.

Butler, John Davis. (1967) Jean Moréas: A Critique of his Poetry and Philosophy. The Hague: Mouton.