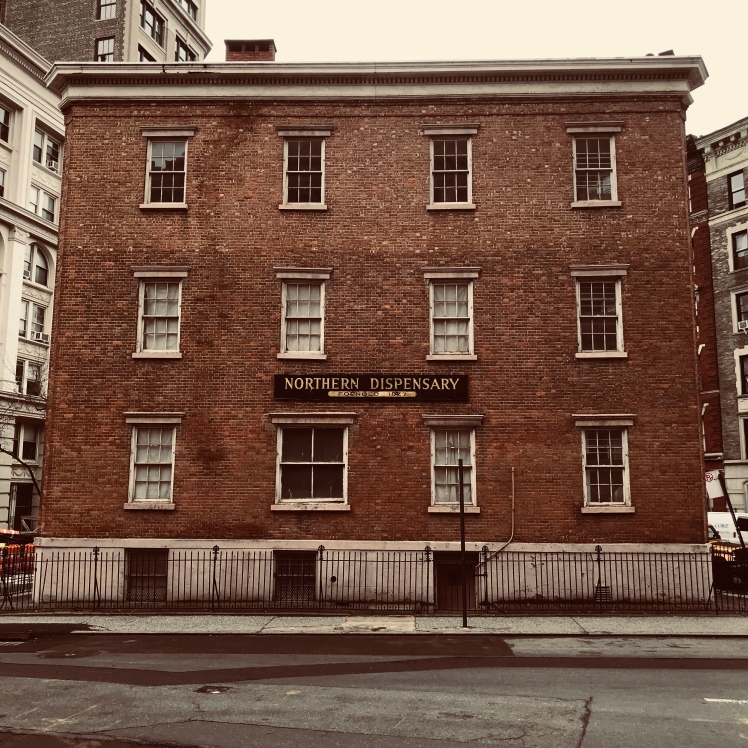 At the triple intersection of Christopher Street, Grove Street, and Waverly Place in Greenwich Village, stands a three-story Federal Style brick building. It is oddly triangular in shape, due its placement on an island of land cut out by the surrounding streets. This is the Northern Dispensary.

The City of New York established a Dispensary for the treatment of the poor in 1791 in the neighborhood of City Hall. But as the city grew it quickly became apparent that the single infirmary was insufficient. In 1824 citizens pushed for a provincial branch far to the north in Greenwich Village. After working from a few temporary locations, the nonprofit Northern Dispensary organization was given the peculiar triangle of land formed where the Y-shaped Waverly Place runs into Grove and Christopher Streets.

In handing over the plot, the City placed a stipulation on the property: it was to be used solely for the purpose of treating the indigent who could not afford hospital care.

Built by a mason, John Tucker, and a carpenter, Henry Bayard, it was completed in 1831.

A ceremonial cornerstone, still to be found on the building’s façade, reads, “Northern Dispensary. Instituted 1827. Built 1831. Heal The Sick.” Indeed, the sick were treated here for over one hundred and fifty years. The Northern Dispensary closed in 1989. The building was purchased the following year by the Roman Catholic Archdiocese of New York, which never used it, and sold it to a real estate developer in 1998. It has stood empty ever since. The original stipulation attached to the deed, that the building can only be used to provide medical care for the “worthy poor,” is still in effect.

According to the records of the dispensary, Edgar Allan Poe was treated here for a severe cold in the winter of 1837, when he was living nearby on Waverly Place. He was given medicine, presumably laudanum, or some other opiate-based cough suppressant, and recovered in due course. This makes the Northern Dispensary one of the few remaining sites in Manhattan with a known Poe connection, although the charming labyrinth of streets in the West Village remains virtually unchanged since Poe’s day.

See also: A Lost House of Edgar Allan Poe and Modern Origins of the Mystery Genre.