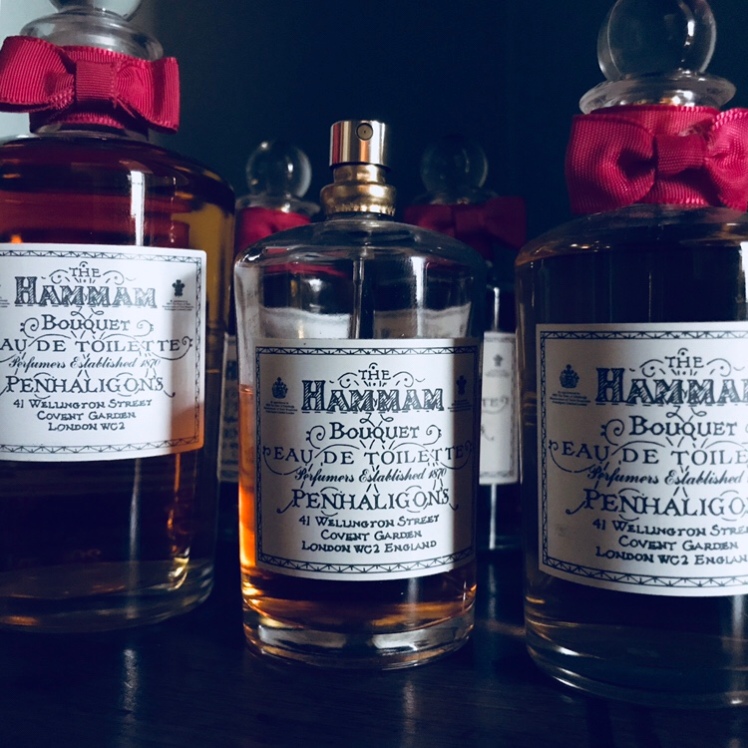 The perfumer and barber William Penhaligon opened his first dedicated shop in London on Jermyn Street in 1891. By that point he was already something of an institution. Since 1869 he had been the resident barber at the elegant Turkish baths next door on Jermyn Street. He created and sold his first fragrance there in 1872. He called it Hammam Bouquet, in honor of the baths that inspired it.

The scent is floral, as the name suggests. Rose is the dominant note. But it is imbued with a “dirty,” sexual, almost obscene under-note of civet musk—that is, pheromone secretions from the wild civet cat. This is tamed by a bright, clean splash of alcohol, bergamot, and powder. It is, in my opinion, perfect.

Hammam Bouquet was the iconic men’s perfume of the High Victorian period. It might surprise the average nose today. It is dandyish and anamalic; one reviewer likened it to “a harlot’s knickers.” But rose and civet is a classic combination in perfumery. King Solomon was said to have imported civet oil from Ethiopia. It first reached England during the reign of King Henry VIII. The Closet for Ladies and Gentlewomen, a recipe book from 1608, includes instructions for making “King Henry the eight his perfume.” Here rose and civet are the dominant ingredients: “Take sixe spoonfulls of compound water, as much of rose water, a quarter of an ounce of fine sugar, two graines of muske, two graines of amber-greece, two of Ciuet, boyle it softly together, all the house will smell of Cloues.”

Hammam Bouquet is a secret treasure of mine. It is the only fragrance I wear, despite the increasing difficulty and expense of procuring it. Until 2007 one could purchase a bottle of the same scent sold by William Penhaligon at the Jermyn Street Hammam a hundred and twenty-five years ago from the company he founded. Not anymore. Penhaligon’s still carries a product called Hammam Bouquet but it bears no resemblance to the original formula. If you wear any old perfume you will have noticed a similar problem. In the early 2000s, the International Fragrance Association, a self-regulatory body of the perfume industry, under pressure from the European Union, banned or restricted the use of almost all natural ingredients in perfume. More than one hundred and seventy ingredients have been restricted, including the principle materials of the trade: oakmoss, rose oil, jasmine absolute, spices, and citrus oils. The pretext was that they evidently cause some people minor allergies, although they have been used safely for centuries. Perfume houses have reformulated their fragrances using synthetic chemicals. The result is that every perfume now smells like cloying and artificial.

The only way to procure an old fragrance is to acquire an old bottle of it. This presents its own set of challenges. The major labels were produced in sufficient quantity to make them readily available on the second hand market. But Hammam Bouquet? That is hard to come by. The demand for it dwindled long ago. I have a horde of bottles that I acquired before the formula was changed. I occasionally add to it. But a natural perfume, like a wine, is a delicate and tenuous substance. Unless it is kept carefully the true scent will break down and become lost in alcohol fumes. I have bought vintage bottles only to end up pouring them down the drain. But it is worth the speculation to acquire a flawless vintage. Eventually the last of my Hammam Bouquet will be used and that will be the end of it. No one will ever smell this wonderful scent again. C’est la vie. In the mean time it lingers in the air here: a faint aura of the glorious past.

Anonymous. (1608) A Closet for Ladies and Gentlewomen: or, The art of preseruing, conseruing, and candying With the manner hovve to make diuers kinds of syrups: and all kind of banqueting stuffes. Also diuers soueraigne medicines and salues, for sundry diseases. London: Arthur Ionson.

“From the Archives: William’s Wit.” (January 20, 2015) The Penhaligon’s Blog, https://www.penhaligons.com/us/blog/from-the-archives-williams-wit/