The Reverend Canon Claude Jenkins served as Regius Professor of Ecclesiastical History at Christ Church, Oxford from 1934 until his death in 1959. In his will he left a collection of thirty to seventy thousand books. He directed that librarians from several Oxford colleges “be given as a free gift such books as they may select for the use of their readers.” St Anne’s alone acquired ten thousand volumes.

During his lifetime this library filled—literally—the five-room house that Jenkins occupied on Tom Quad at Christ Church. Theologian E.L. Mascall described the scene in his memoir Saraband:

in the corners of each room piles of books were thrown down anyhow like sand in the corner of a builder’s yard, and the bath, which was not used for its normal purpose, was a kind of dump for odd printed scraps. It was only just possible to push one’s way up the staircase, for on every step there were piles of books extending high out of reach; in fact the view of the staircase-wall reminded me of a sectional diagram of geological strata in an atlas, and one could see how the conformation had readjusted itself after a cataclysm had occurred through a removal of the book from one of its lower levels. 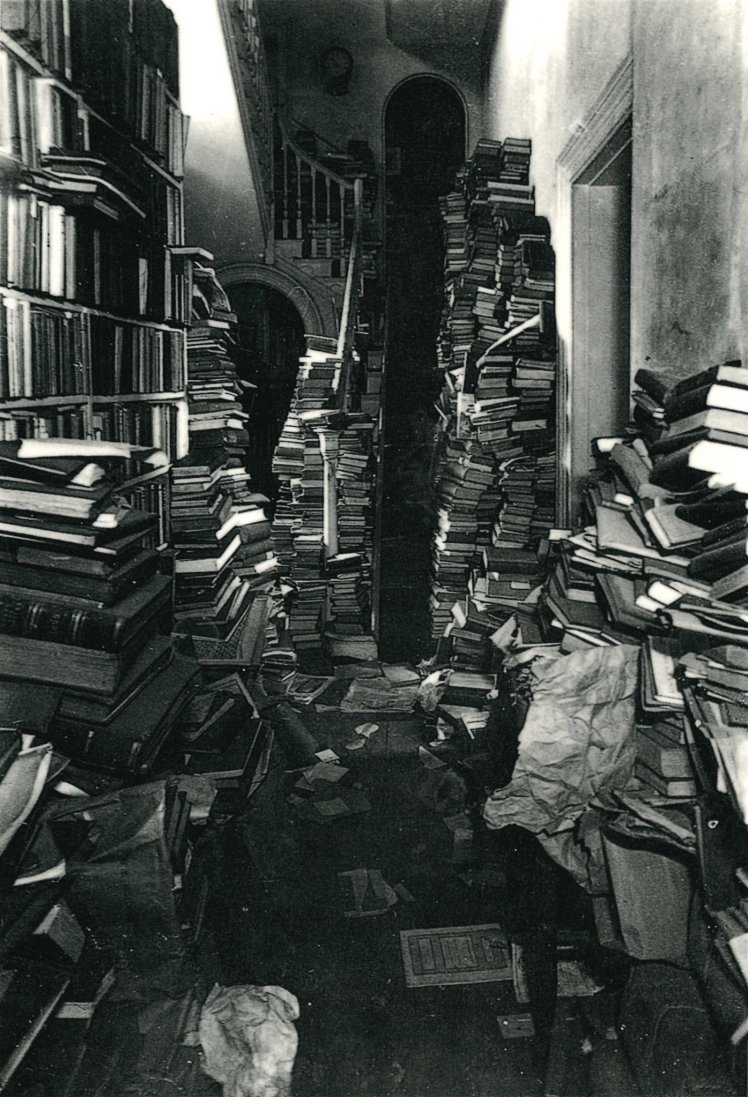 A long and interesting article about the collection appears at the website of St Anne’s College library.

Otto Penzler, publisher and proprietor of The Mysterious Bookshop in New York, is selling his personal collection of rare books at auction.

Penzler has been collecting first edition detective fiction for more than fifty years. In the early days, he says, “It was easy to find a half dozen first editions in collectable condition within my five-dollar-a-week budget. My primary drive was buying a book in the mystery world that I could afford. It was the pure joy of collecting.” In 1979 he opened The Mysterious Bookshop.

One of the very first things bibliophile-for-all-seasons Otto Penzler wants you to know about the 58,000 books he keeps in a Tudor-style chateau in the Connecticut countryside is that it was not something put together willy-nilly by someone with a fortune to throw around on first editions.

“I am not a rich guy,” he insisted, even though the trappings of this graceful manor eighty miles north of Manhattan in bucolic Litchfield County—especially the triple-level library that at times suggests the soaring interior of a ducal chapel—would suggest otherwise. “This took an entire railroad car of mahogany wood to make,” he said of the exquisite shelves, fittings, and hand-hewn storage areas he was about to show me, all built to his design and specifications over a two-and-a-half-year period more than a decade ago.

I am sorry to see a collection like this broken up, but many collectors will undoubtedly walk away happy.

The sale is being conducted by Heritage Galleries. Part One will be held at their Rare Books Auction on March 6 in New York. This lot emphasizes American authors and hardboiled literature. Online bidding has already begun. Part Two will be held on September 5 in New York, with an emphasis on British authors.