A dolmen is a type of Neolithic tomb architecture found in Western Europe. So what would one be doing in a small town in the Hudson Valley? Balanced Rock in North Salem, New York is a unique example of (what appears to be) a European megalith in North America, long predating recorded transatlantic contact.

I filmed a short video about the structure which you can watch below, or at YouTube.

When I was growing up my father was a member of the Downtown Athletic Club on West Street in lower Manhattan. The D.A.C. was best known for awarding the Heisman Trophy to college football players beginning in the 1930s. The clubhouse was a purpose-built Art Deco tower with sports facilities, baths, dining, and guest rooms. Located near the Battery its membership mostly worked on Wall Street.

The club is gone now. It was in financial decline by the late 1990s when I graduated high school and it never reopened after 9/11. The landmarked building has been converted into condos and the membership were scattered to our midtown clubs.

For a time the D.A.C. boasted the longest bar in New York. Above it hung a mural based on Washington Irving’s story “Rip Van Winkle.” An article in the June 1931 club bulletin describes the artwork:

The first panel at the extreme left shows Rip Van Winkle going up into the Catskills with his newly found friend. In the center panel we see Henrich Hudson’s men bowling, drinking and having a general good time. Rip is partaking generously from the jug. The third panel shows Old Rip’s return to town where after twenty years no one seems to know him.

Aldo Lazzarini, the artist, spent about six weeks on the paintings and J. Schuyler Casey often visited the studio to watch the work as it progressed.

The only picture I could find of the mural is the low-quality scan reproduced above. It shows a detail from the center panel. I wonder what happened to the mural. I would like to think it found a good home.

From the year 1630 until well into the nineteenth century the Van Rensselaer family were lords of the manor of Rensselaerwyck, a vast fiefdom in upstate New York, around Albany. Killian Van Rensselaer had acquired the land from the Dutch West India Company ten years after the Mayflower landed and it remained in the family through successive Dutch, English, and American governments. I described the later years of the manor at length in my biography of James Fenimore Cooper, a friend of the family.

The manor house was dismantled in the 1890s and rebuilt as the Sigma Phi fraternity house, called Van Rensselaer Hall, at Williams College in Massachusetts. Unfortunately it was torn down by the college in the 1970s. The only surviving fragments of the house were interiors donated to the Metropolitan Museum of Art. The wallpaper of the great hall has been used to reconstruct the room in the American Wing. On a recent visit to the museum I took the opportunity to photograph the furnishings in detail.

In 1927 the weird fiction writer H. P. Lovecraft devised for himself a coat of arms. It was done in the spirit of fun, influenced by his friend Wilfred Blanch Talman, “who has transmitted enough of his enthusiasm” for heraldry to motivate the undertaking. To my knowledge Lovecraft never assumed the arms in any practical sense but he approached the design with a high degree of genealogical seriousness. Anyone who has read his letters knows that he was a repository for family history so this is not surprising.

The personal arms represent a quartering of those granted to various paternal and maternal ancestors, what Lovecraft calls his “four main streams of blood.” In a letter to Frank Belknap Long, he explains the quarters:

The upper two, left to right, are Lovecraft & Phillips, which I have always known. The lower left is Allgood—family of my father’s mother—of which I had the verbal description, but I never saw drawn out till Talman interpreted the language with his facile pen. The lower right is Place—family of my mother’s mother—which I had never seen in my life until yesterday afternoon when when we looked it up at the library…the crest and motto are Lovecraft.

The letter is in the collection of Brown University Library.

A few more pictures from this summer’s wanderings in Plymouth, Massachusetts, during the quadricentennial of the Mayflower landing:

Above is the view out to Cape Cod Bay from Plimoth Plantation, a recreation of the first English settlement circa 1620. It was built in the 1950s by Henry Hornblower II, an archaeologist, Harvard man, and investor with the family firm of Hornblower & Weeks.

Below is a reconstruction of the Jenney Grist Mill in downtown Plymouth. It stands on the site of the original mill that served the early colonists.

Across from the grist mill and up a long walk is Burial Hill, the site of the first English fort, and cemetery. A number of Mayflower passengers are buried here including Governor William Bradford and our family patriarch Richard Warren.

Visible from Burial Hill is the steeple of the First Parish Church, recently taken under the custodianship of the General Society of Mayflower Descendants.

A hundred years ago this year for the tricentennial of the Mayflower landing, a neoclassical portico by the architectural firm, McKim, Mead & White, was erected over Plymouth Rock.

The lead architect on the project was partner William M. Kendall. It was Kendall who had chosen the inscription, “Neither snow nor rain nor heat nor gloom of night stays these couriers from the swift completion of their appointed rounds,” for the New York City General Post Office building designed by the firm in 1912. The line, taken from a description by Herodotus of the Persian postal couriers, has become the unofficial motto of the US Postal Service.

Kendall was the son of classicist Joshua Kendall, and a Mayflower descendant.

See also: The Mayflower Quadricentennial and Around Plymouth.

As 2020 marks the 400th anniversary of Mayflower landing at Plymouth Rock, we traveled to Cape Cod Bay this summer for a quiet commemoration. My children descend on their mother’s side from the Mayflower passenger Richard Warren, so it was an occasion to pay regards to their sixteen-times great grandfather. Not to mention a welcome respite: sea mist and cool gray skies throughout.

The original Mayflower returned to London with her captain and was probably demolished in Rotherhithe around 1624. But in the 1950s a replica museum ship was moored at Long Wharf near Plymouth Rock where it remains a popular tourist attraction. Mayflower II is seaworthy, having sailed from England where she was built, following her predecessor and namesake. But in the lead-up to the quadricentennial the ship underwent extensive restoration at Mystic seaport in Connecticut. A crew member told me that approximately seventy per cent of the wood is new.

This past week was the homecoming for Mayflower II which returned to Plymouth on Monday.

This year is the bicentennial of Washington Irving’s “The Legend of Sleepy Hollow.” The story first appeared in The Sketch Book of Geoffrey Crayon, which was published in serial between 1819 and 1820.

To mark the occasion, I attended a dramatic reading of the story at The Old Dutch Church in Sleepy Hollow, New York. The church itself features prominently in the story. It was an old feature on the landscape when Irving lived nearby in Tarrytown. Built in 1685 by Frederick Philipse, the Lord of Philipse Manor, whose vast patroonship extended south all the way to Spuyten Duyvil in the Bronx, the building is still owned by the Dutch Reformed parish in Tarrytown.

Mariana Griswold Van Rensselaer writing in The Century Magazine (May, 1897):

There have been times when the word “suburban” rang pleasantly in the ears of the citizen of New York. Such must have been the times, long ago, when Greenwich village and Chelsea village were the summer resorts of local magnates, and when Harlem village (legend affirms it) was a health-resort so placidly umbrageous, Dutch, and small that people who could not sleep in town were sent out there, assured of a week of unbroken slumber. And such, again, were the nearer times when all the isle was still suburban north of Washington Square, covered with farms, and dotted with country mansions that were often set in forest-like domains, and often fronted on the East or the North or the Harlem River. 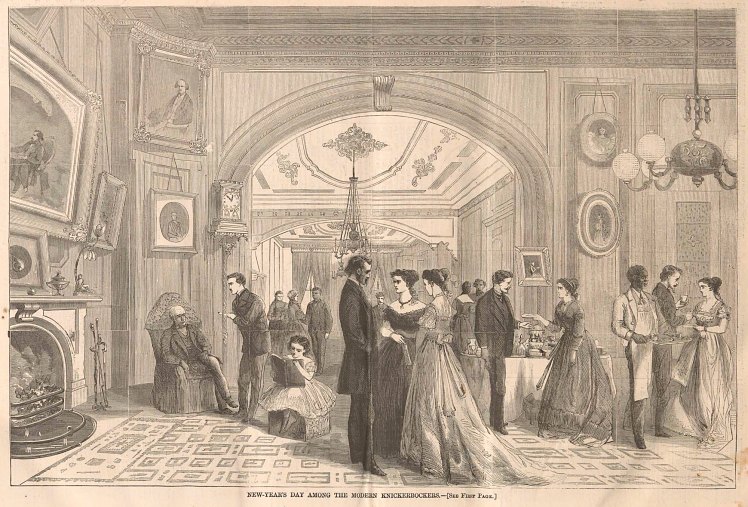 It is lamented in the January 1916 issue of The Lotus Magazine that, “[i]t may be a matter of thirty-five long years ago—possibly longer—that the custom of New Year’s calls was abandoned in New York.”

As part of the social season around Christmastide the hosting (and visiting) of open houses on the first of the year “came down from the time when New York was a Dutch colony.”

According to The Lotus:

From old Dutch times to about 1880 New Year’s Day in New York was devoted to the universal interchange of visits. Every door was thrown wide open. It was a breach of etiquette to omit any acquaintance in these annual calls, when old friendships were renewed and family differences were amicably settled. A hearty welcome was extended even to strangers of presentable appearance.

Everywhere “the traditions of tremendous Dutch eating and drinking were faithfully observed.” Certain houses were noted for their specialities: “At one it was eggnog; at another, rum punch; at this one, pickled oysters; at that, boned turkey, or marvellous chocolate, or perfect Mocha coffee, or, for the connoisseur a drop of old Madeira, as soft as rainwater and as delicate in flavor as the texture of the glass from which it was sipped.” Everyone served New Year’s cakes, “in the form of an Egyptian cartouch.” Matthew Wills writes in JSTOR Daily that, “No explanation of that particular design is given, so we may surmise that Egyptomania, born of Napoleon’s Egyptian campaign of 1798-1801 and subsequently fostered by the Victorians, was still going strong.”

At the height of the tradition, when New York society was still a small world of friends, the open houses were merry, informal gatherings. For the young they must have been looked forward to with much excitement. Wills writes, “By the mid-1800s, these calls were also a chance for single young men to meet single young women. It was a good way to scout out the possibilities on both sides of the marriage market.”

But by the 1880s the city had become too populous and anonymous for such a civilized tradition. The writers of The Lotus conclude that, “The gradual breaking down of all the lines of conventionality into a wild and unseemly riot of visits led to the finish of the custom.” More’s the pity.