The UK government has given final approval to a development plan that will convert the Whitechapel Bell Foundry into a hotel with drastic architectural changes. The foundry operated on Whitechapel Road from 1739 until it was sold in 2017. Big Ben and the Liberty Bell were cast on the premises. Heritage groups attempted to intervene. In 2018 I covered a proposal by the UK Historic Building Preservation Trust to acquire the foundry and continue manufacturing bells.

From the year 1630 until well into the nineteenth century the Van Rensselaer family were lords of the manor of Rensselaerwyck, a vast fiefdom in upstate New York, around Albany. Killian Van Rensselaer had acquired the land from the Dutch West India Company ten years after the Mayflower landed and it remained in the family through successive Dutch, English, and American governments. I described the later years of the manor at length in my biography of James Fenimore Cooper, a friend of the family.

The manor house was dismantled in the 1890s and rebuilt as the Sigma Phi fraternity house, called Van Rensselaer Hall, at Williams College in Massachusetts. Unfortunately it was torn down by the college in the 1970s. The only surviving fragments of the house were interiors donated to the Metropolitan Museum of Art. The wallpaper of the great hall has been used to reconstruct the room in the American Wing. On a recent visit to the museum I took the opportunity to photograph the furnishings in detail.

Long ago a reader commented with an interesting historical and, it turns out, archaeological question:

Visited St. Paul’s Cathedral today in hope of finding the epithet of our ancestor John Cawood who was Queen Mary’s and Queen Elizabeth’ royal printer in the 1500’s. He was a member of St. Faith under St. Paul’s Church and supposedly buried there. By chance do you have a listing of those who were buried there or other information.

Every monument that survived the Great Fire of 1666 is accounted for and John Cawood’s is not among them so we have to assume it was lost in the destruction of Old St Paul’s. Thankfully a description of the Cawood monument survives. Payne Fisher, who was poet-laureate to Oliver Cromwell, recorded all of the memorials, their locations and descriptions, in his book The Tombs, Monuments, &c., Visible in S. Paul’s Cathedral (and S. Faith’s Beneath It) Previous to Its Destruction by Fire A.D. 1666.

According to Fisher, the Cawood memorial was located “over the Pillar” in the “Eastern part of the Church.” The epitaph read as follows:

Fisher’s book can be read in its entirety online.

The British government went against the recommendations of planning officials Thursday, approving controversial plans for a road tunnel to be built near the prehistoric monument of Stonehenge in southern England.

The lifespan of concrete is remarkably short. Modern reinforced concrete needs repairs after only fifty years. In the fullness of time the decay of the tunnel will destabilize the landscape around Stonehenge. Assuming this generation wishes to bequeath the monument to posterity the risk is unacceptable.

Update (July 2021): The High Court has ruled against the consent order; there is new hope for the old stones.

A few more pictures from this summer’s wanderings in Plymouth, Massachusetts, during the quadricentennial of the Mayflower landing:

Above is the view out to Cape Cod Bay from Plimoth Plantation, a recreation of the first English settlement circa 1620. It was built in the 1950s by Henry Hornblower II, an archaeologist, Harvard man, and investor with the family firm of Hornblower & Weeks.

Below is a reconstruction of the Jenney Grist Mill in downtown Plymouth. It stands on the site of the original mill that served the early colonists.

Across from the grist mill and up a long walk is Burial Hill, the site of the first English fort, and cemetery. A number of Mayflower passengers are buried here including Governor William Bradford and our family patriarch Richard Warren.

Visible from Burial Hill is the steeple of the First Parish Church, recently taken under the custodianship of the General Society of Mayflower Descendants.

A hundred years ago this year for the tricentennial of the Mayflower landing, a neoclassical portico by the architectural firm, McKim, Mead & White, was erected over Plymouth Rock.

The lead architect on the project was partner William M. Kendall. It was Kendall who had chosen the inscription, “Neither snow nor rain nor heat nor gloom of night stays these couriers from the swift completion of their appointed rounds,” for the New York City General Post Office building designed by the firm in 1912. The line, taken from a description by Herodotus of the Persian postal couriers, has become the unofficial motto of the US Postal Service.

Kendall was the son of classicist Joshua Kendall, and a Mayflower descendant.

See also: The Mayflower Quadricentennial and Around Plymouth.

As 2020 marks the 400th anniversary of Mayflower landing at Plymouth Rock, we traveled to Cape Cod Bay this summer for a quiet commemoration. My children descend on their mother’s side from the Mayflower passenger Richard Warren, so it was an occasion to pay regards to their sixteen-times great grandfather. Not to mention a welcome respite: sea mist and cool gray skies throughout.

The original Mayflower returned to London with her captain and was probably demolished in Rotherhithe around 1624. But in the 1950s a replica museum ship was moored at Long Wharf near Plymouth Rock where it remains a popular tourist attraction. Mayflower II is seaworthy, having sailed from England where she was built, following her predecessor and namesake. But in the lead-up to the quadricentennial the ship underwent extensive restoration at Mystic seaport in Connecticut. A crew member told me that approximately seventy per cent of the wood is new.

This past week was the homecoming for Mayflower II which returned to Plymouth on Monday.

The library of Lambeth Palace contains the great collection of the Archbishop of Canterbury and the records of the Church of England. It has historically been kept in the palace complex but this year a purpose-built edifice was erected to house it.

Mock-ups of the design were released well in advance so it will surprise no one that the finished building is cold, institutional, and modern. But it might have been very different.

The architect Francis Terry recently shared designs on Twitter that he had submitted to the project. Terry’s vision for the library was a lovely Victorian gothic building sensitive to its surroundings and in keeping with the Tudor and Gothic survival/revival layers of Lambeth Palace itself.

This is Terry’s design:

This is the design that was built:

Terry describes his plan in an essay for UnHerd, writing:

Back in 2015 there was a competition to design a new library for Lambeth Palace. My scheme was up against the great and the good of the architectural establishment. I decided to design a Gothic style library reminiscent of the other buildings of Lambeth Palace. To avoid a huge tower with no windows overshadowing the garden, I decided to put all the archive space underground. It was a concept that would be more detailed and rationalised if my design was chosen by the judges. It is extremely rare for traditional designs like mine to win prestigious architectural competitions and so it came as no surprised when my scheme was rejected at the first available moment.

The winning design strikes me as distinctly inappropriate for an ecclesiastical setting.

In 1987, The Prince of Wales famously excoriated the shortsighted city planners and developers who rebuilt London after the Second World War. “You have to give this much to the Luftwaffe” he said. “When it knocked down our buildings, it didn’t replace them with anything more offensive than rubble. We did that.”

Decades earlier the weird-fiction writer and sometime Londoner Arthur Machen expressed similar sentiments. In the Spring 2019 issue of Faunus, R.B. Russell quotes a letter by Machen to Montgomery Evans around the end of the War. Machen writes:

And that brings me to the confession that I don’t curse the Germans very fiercely for their London destruction so far as the new buildings are concerned. It is we who destroyed London & wrecked the Strand, pulled down the Adelphi, abolished Clifford’s Inn (pre-Great Fire), built flats where Clements Inn once stood with green lawns. You can remember the old Café Royal: it wasn’t Germans who ruined it. And as for the Wren churches in the City: it was with great difficulty that the Bishop of London was restrained from pulling many of them down & selling the sites 20 years ago.

In 1950 American photojournalist Jack Birns crossed the Swiss Alps to document one of the last stagecoach services in Europe, running between towns along the Simplon Pass. He had first encountered this survival from an earlier age of transportation six months earlier while photographing a journey on the Orient Express.

Stagecoaches served a vital function for the remote Alpine towns carrying passengers, mail, and supplies as similar coaches had done for centuries. Birns’s report was published in LIFE magazine in 1951. Shortly thereafter the service was discontinued, the horse-drawn coaches replaced by motor-buses.

Photographs in the series capture the scenic, often perilous, journey over mountains, through villages, towns and cities, but they also capture the lives of the coachmen and their passengers.

The journey begins at Brig in Switzerland. Coaches would depart from there at 7:20 each morning and were due to arrive at Iselle in Italy by 6 o’clock in the evening. Passengers paid 7 Swiss francs and 40 centimes for passage, about two U.S. dollars in 1951, or twenty dollars today. 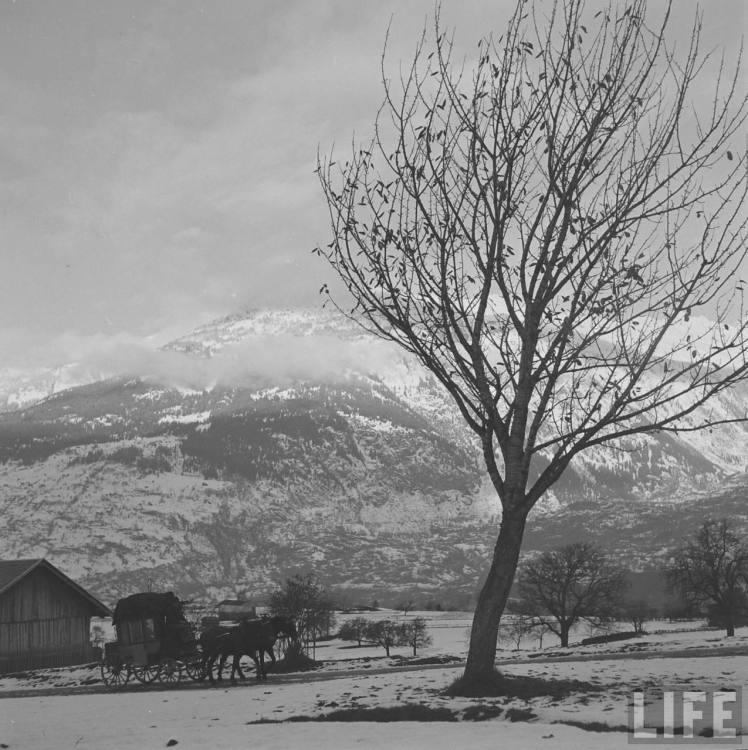 At certain points along the route sleighs were used instead of coaches to cross otherwise impassible snow. Pictured below: coachman Anton Bruchi (center) hands over the mail to sleigh driver Johann Zenklusen.

The road over the Simplon Pass was constructed by Napoleon’s engineer Nicolas Céard between 1801 and 1805. One of the four short tunnels built at the time has an arched extension for use when heavy snow interferes with travel along the main road.

Napoleon’s memory looms large on the Simplon Pass. Pictured below: Coach driver Edouard Theiler and a barmaid pose with a milk cup used by the Emperor at a hotel in Gstein-Gabi and the coin which he used to pay for it. Theiler had been driving coaches for thirty years when Birns met him.

Hospitality in the towns along the route was rustic and simple but no doubt much appreciated by passengers and coachmen alike.

End of the line: the coach crosses the Italian border and Theiler enjoys a well-deserved drink at a café in Iselle. 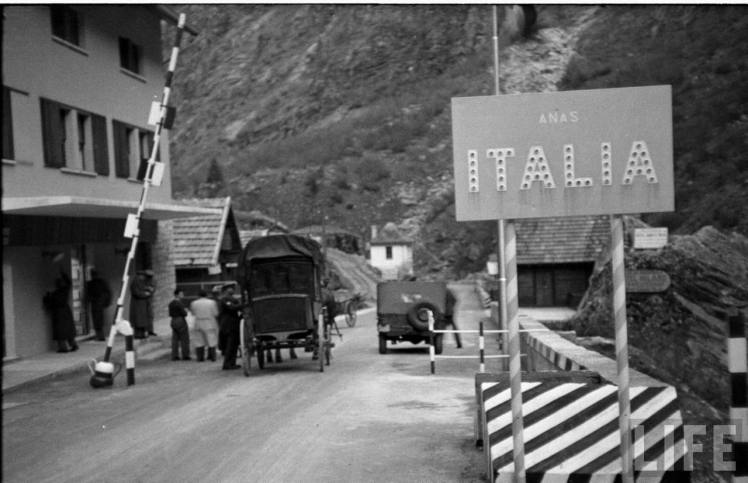