The definitive exhibition on the Byron-Shelley circle was hosted by the New York Public Library in 2012. Shelley’s Ghost brought together materials from the Bodleian and the NYPL’s own Pforzheimer Collection, including the manuscript of Mary Shelley’s Frankenstein, Byron’s love letters, a necklace made from Percy Shelley’s hair, the water-damaged copy of Sophocles’s Tragedies that had been on his person when he drowned, as well as fragments of his skull taken from the funeral pyre, among other artifacts.

Pages from the manuscript are on display, loaned by the Bodleian. The curators provide a cultural context with eighteenth century galvanic equipment and surgical tools, a number of important Gothic paintings, including Henry Fuseli’s The Nightmare (1781) and Philip James de Loutherbourg’s Visitor to a Moonlit Churchyard (1790). The lives of the Shelleys are presented through letters and portraits, including the well-known Richard Rothwell painting of Mary, on loan from the National Portrait Gallery in London. The aforementioned fragments of Percy’s skull (calvariae disjecta?) are present, as is the manuscript of a love poem he was carrying when he drown, the ink washed to a blur. (I have written about the extraordinary circumstances surrounding Shelley’s death in an earlier post.)

All of these items are on display in a single gallery, which is worth the price of admission alone. A light but cheerful second gallery contains a collection of advertising posters from the various film adaptations of the novel, and modern illustrations, including those by Lynd Ward and Bernie Wrightson. The highlight of this gallery is an original six-sheet poster for the 1931 film starring Boris Karloff. 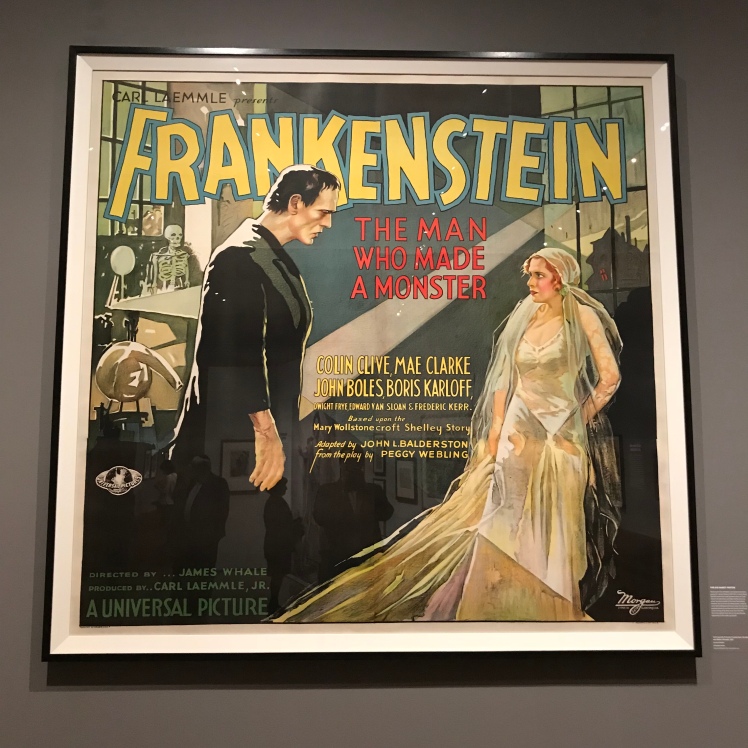 The Quarterly Review probably did not kill John Keats with its criticism of Endymion, as Lord Byron claimed, but it did eerily foretell the death of Percy Bysshe Shelley. Notwithstanding his obvious talents as a poet, like all radicals Shelley was rather insufferable. He would give “atheist” as his occupation in hotel registers and bore casual acquaintances with tirades against the government. Even the gentle Keats was provoked to a sharp retort. “Does Shelley go on telling strange Stories of the Death of kings,” he asked a mutual friend. “Tell him there are strange Stories of the death of Poets—some have died before they were conceived.”

Inevitably, Shelley ran afoul of the the Quarterly Review, which was the leading conservative literary journal of the early-nineteenth century. Contributors included Sir Walter Scott, Robert Southey, the future prime minister George Canning, gothic novelist Charles Maturin, and others. Scott’s enthusiastic praise for Emma in its pages established the contemporary reputation of Jane Austen. But the Quarterly was better known for its pugilistic criticism, gaining a reputation as the “Hanged, Drawn, and Quarterly.”

In the issue for April of 1819, editor John Taylor Coleridge (brother of Samuel) wrote an absolutely withering mockery of Shelley’s political philosophy:

Mr Shelley would abrogate our laws—this would put an end to felonies and misdemeanours at a blow; he would abolish the rights of property, of course there could thenceforward be no violations of them, no heart-burnings between the poor and the rich, no disputed wills, no litigated inheritances, no food in short for sophistical judges, or hireling lawyers; he would overthrow the constitution, and then we should have no expensive court, no pensions or sinecures, no silken lords or corrupt commoners, no slavish and enslaving army or navy; he would pull down our churches, level our Establishment, and burn our bibles—then we should pay no tithes, be enslaved by no superstitions, abused by no priestly artifices: marriage he cannot endure, and there would at once be a stop put to the lamented increase of adulterous connections amongst us, whilst by repealing the canon of heaven against incest, he would add to the purity, and heighten the ardour of those feelings with which brother and sister now regard each other; finally, as the basis of the whole scheme, he would have us renounce our belief in our religion…

This is at least intelligible; but it is not so easy to describe the structure, which Mr Shelley would build upon this vast heap of ruins. ‘Love,’ he says, ‘is to be the sole law which shall govern the moral world;’ but Love is a wide word with many significations, and we are at a loss as to which of them he would have it now bear. We are loath to understand it in its lowest sense, though we believe that as to the issue this would be the correctest mode of interpreting it; but this at least is clear, that Mr. Shelley does not mean it in its highest sense: he does not mean that love, which is the fulfilling of the law, and which walks after the commandments, for he would erase the Decalogue, and every other code of laws.

Then came the coup de grâce, in the form of an ill omen:

Like the Egyptian of old, the wheels of his chariot are broken, the path of mighty waters closes in upon him behind, and a still deepening ocean is before him:—for a short time, are seen his impotent struggles against a resistless power, his blasphemous execrations are heard, his despair but poorly assumes the tone of triumph and defiance, and he calls ineffectually on others to follow him to the same ruin—finally, he sinks ‘like lead’ to the bottom, and is forgotten. So it is now in part, so shortly will it be entirely with Mr. Shelley.

When the article was published Shelley was living in Italy. He read it in October at Delesert’s English Library in Florence. He was observed there, “earnestly bent over the last Quarterly…reading to the end of the article in the same earnest manner, his nose almost touching the book: suddenly he burst into convulsive laughter, and hastily rising, closed the book and left the room, his Ha! ha! ringing down the stairs.”

Less than three years later, Shelley drowned in the Ligurian Sea when a sudden storm overtook his sailboat, on July 8, 1822.  “We shall never know by what curious premonition John Taylor Coleridge found his biblical image,” writes Richard Holmes in Shelley: The Pursuit.